Review of: The Thin Light of Freedom: The Civil War and Emancipation in the Heart of America, by Edward L. Ayers

When I was growing up in the 1960s, the Civil War was often dubbed a struggle of “brother against brother,” uttered with a smack of wonderment at how it was that a nation united by so many commonalities could have could come apart like that, only one 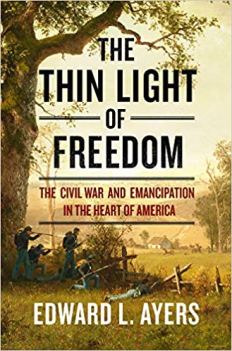 short century prior, taking more than six hundred thousand lives in the process? Then, as the centrality of slavery came to be properly emphasized, both historiography and sentiment shifted.  Certainly, there were plenty of families divided by war—perhaps most famously Mary Lincoln’s, whose brothers fought for the Confederacy—but the real division turned out to be geographic and defined more by the South’s “peculiar institution” than habit or climate. Alexis de Tocqueville’s oft-cited anecdotal 1835 comments, in Democracy in America, that sharply characterized the vast cultural gulf that lay between free and slave states on opposite sides of the Ohio River, turned out to reflect a true demarcation that saw two different visions of America evolve within a single nation. Slavery defined the south, even if most southerners were not slaveowners, so that long before secession the south had indeed become another country.

That such conclusions can also be overdrawn was brilliantly demonstrated by historian Edward Ayers in his magnificent 2003 work, In the Presence of Mine Enemies: War in the Heart of America, 1859-1863, which surveys the “Great Valley” that stretches north of the Mason-Dixon line to encompass Franklin County, Pennsylvania, and south of it to include Augusta County, Virginia. Slavery was indeed part of the fabric of life in the lower valley in cities like Staunton, Virginia, yet on the eve of the war its citizens still had much more in common than not with denizens of the upper valley in cities like Chambersburg, Pennsylvania, which was free soil. Relationships that went well beyond trade flourished in a porous border of communities that shared a largely common identity. Much of Augusta County was old Whig and staunchly Unionist; when the secession crisis was upon them most fiercely resisted calls to leave the Union.  But when Virginia joined the Confederacy, those loyalties quickly shifted. Franklin County had little sympathy for what it viewed as the treason of their southern brethren. Men from both sides eagerly—or not so eagerly, depending upon the man—grabbed muskets and rushed off to the killing fields in the name of honor and duty or simply obligation. The war truly tore the Great Valley asunder, and before it was through both sides were littered with death and destruction utterly unimaginable just a few years earlier.

In his latest work, The Thin Light of Freedom: The Civil War and Emancipation in the Heart of America, Ayers picks up where he left off, taking the saga from the critical turning points of the war that characterized the summer of 1863 to Appomattox and its aftermath, and beyond that through Reconstruction and what was to be its tragic legacy for African Americans.  In chapters often bracketed by an italicized overview that puts events in the valley in context with the wider perspective of the war, Ayers narrows the lens to focus upon key individuals emblematic of the struggle on the ground. It is in these human stories that it becomes clear that the noise of cannon fire, calls to glory, and the plaintive cries of the wounded and the dying coming from the valley was actually something of a small-scale version of the greater thunder that echoed across the national landscape in a terrible, bloody conflict that claimed so very many lives before the guns fell silent.

Virginia’s Shenandoah Valley had long been the bread basket for the Confederacy, and its citizens still proudly recalled when Stonewall Jackson made a mockery of three Union armies in its environs in his brilliant Valley Campaign of 1862.  But Jackson was dead now, a victim of friendly fire at Chancellorsville, and Federal forces threatened both the farms and the rails that delivered their precious products to grey-clad stomachs. One of the chief motives that took Lee—sans his most famed lieutenant—to Gettysburg was an attempt to divert Union forces to take the pressure off valley farmers and protect cherished crops. Despite his failure there, the valley did win a brief respite, and—to Lincoln’s great chagrin—Lee managed an orderly retreat with a wounded yet still formidable army that was to persist in the field for nearly two full years. In between, the men in Lee’s army were forsworn from the kind of destruction and plunder that they found so abhorrent in the ravages—both real and imagined—visited upon the Shenandoah by the Union, which was universally branded by southerners as uncivilized. The exception was to be the African American, formerly enslaved or just of a matching color, that the Army of Northern Virginia gleefully rounded up and sent south to become chattel. Their version of civilization remained unrattled by such acts of cruelty.

The point has been made that the “total war” of the twentieth century was presaged by the acts of Union forces upon civilians in the Civil War, but that is manifestly overdrawn.  Even at its height, as Sherman marched to the sea and Sheridan despoiled the Shenandoah, Grant’s strategic imperative designed to deny the Confederacy foodstuffs and matériel hardly resulted in the slaughter of innocents seen in 1914 and beyond. At the same time, for those who lived through it, it seemed a line had been crossed from an earlier age, even if historians might argue that same line had already been crossed by the British some four-score years prior. There was palpable pain on both sides, even if the south suffered more as the war ground on to its final conclusion. Federal forces indeed quite ruthlessly put farms and factories out of business in the Shenandoah. Earlier restraint eventually gave way, and Confederates mercilessly and without regret retaliated by burning Chambersburg, Pennsylvania in 1864.

Virginia was, of course, the central battleground of the Civil War in the eastern theater, so she had more stories to tell. Many of these stories come from the valley, and some truly tear at the heartstrings:

On [one Virginia] farm, a Union officer ordered a fine mare bridled and led away. When the mare’s colt followed its mother, the farm woman begged them not to take an animal so young that it could be of no use to an army. The officer agreed the animal was useless and simply commanded one of his men to shoot the colt. The woman wept over its body. People remembered these stories for generations. [p240]

But the tear in the reader’s eye for the dead colt and the sobbing woman is quickly washed away and replaced with horror as Ayers recounts another telling episode:

[In Saltville, in 1864,] Confederates, enraged after discovering that they were fighting against black men, killed the wounded African-American soldiers left behind after the failed Union attack. [Diaries of those at the scene reported] … Confederate soldiers … “shooting every wounded negro they could find” [and] that scouts “went all over the field and … sung the death knell of many a poor negro who was unfortunate enough not to be killed yesterday. Our men took no negro prisoners. Great numbers of them were killed yesterday and today…” [General John Breckinridge arrived and] “ordered that the massacre should be stopped. He rode away and—the shooting went on. The men could not be restrained.” The murder continued for six more days, culminating with guerrillas forcing their way into a makeshift hospital at Emory & Henry College and shooting men, black and white, in their beds … A Richmond newspaper printed a tally that showed telling numbers: 150 black Union soldiers had been killed and only 6 wounded, while 106 white soldiers had been killed and 80 wounded. The ratios testified that dozens of wounded African-Americans had been killed …The Richmond paper celebrated the rare Confederate victory over all the “niggers” and Federal troops. [p242-43]

In extremely well-written accounts like these that marry a passionate narrative to solid history aimed at both the scholarly and popular audience, Ayers artfully brings the heartbreaking realities of war in the valley on both sides to our modern doorstep, forbidding us to look away, and compelling us to pick up and cradle the truth of what really transpired.

Of course, as the postwar “Lost Cause” myth took hold, we know now that stories like the dead colt would not only frequently be repeated, but magnified and romanticized, while the slaughter of wounded blacks in Saltville would deliberately be erased. Since most histories of the conflict end at Appomattox or shortly thereafter, readers are denied the painful epilogue of how that came to be so. Here Ayers bucks that trend and keeps going all the way to 1902.

A potent strain in the most recent historiography argues convincingly that while the north claimed military victory, the south ultimately won the Civil War. A week after Lee’s surrender, Lincoln was dead, replaced by Tennessean Andrew Johnson, who welcomed the ex-Confederates who seized political power as the states that had seceded were restored to the Union, while demonstrating little regard for the millions of formerly enslaved African Americans cast adrift in a hostile and economically devastated southern landscape. Despite the efforts of the “Radical Republicans” who controlled Congress to seek justice for blacks through Reconstruction, Johnson dominated events, and blacks found themselves terrorized and murdered by former Confederate elites who would not tolerate steps towards fairness and equality. With emancipation, the former “three-fifths” rule that defined representation was no more, and with millions of blacks now counted as actual persons, newly readmitted states actually gained more political power than they had possessed in the antebellum years. Institutionalized terror kept African Americans from the ballot box and transformed their status into that of second-class citizen, which was hardly challenged in the century to follow.

If the valley was a kind of microcosm of the Civil War in America, by extending his narrative Ayers superbly demonstrates that so too was its unfortunate aftermath for African Americans. The Thin Light of Freedom is an outstanding work on multiple levels, not least in its success in conjuring empathy for all of the victims on both sides, and guiding us to a greater appreciation of how and why the many unresolved elements of that long ago conflict continue to resonate, often uncomfortably, for the United States in the twenty-first century.

NOTE: This review is now available for listening or download as a Podcast:

PODCAST#4 … Review of The Thin Light of Freedom: The Civil War and Emancipation in the Heart of America, by Edward L. Ayers

Many more book reviews are available on my book blog!